Is the System Approved by Class?

SeaClean is a customized solution for the elimination of generator exhaust pollution.

As such, each installation is unique to the yacht on which it is fitted. When a yacht owner or builder selects SeaClean, DeAngelo Marine Exhaust begins the process of designing the complete system from turbocharger to overboard. The completed design drawings, schematics, and material specifications are then submitted to Class for design approval.

After fabrication, installation and commissioning is complete, a Class surveyor will inspect and approve the installation.

DeAngelo has successfully completed this process on close to 30 installations to date with cooperation from all major classification societies.

What Sort of Back Pressure Do You Get Using This System?

We typically develop backpressure in the mid teens of water column or just under 4 kPa at 60 to 80 percent loads.

This depends a great deal on the rest of the exhaust system. The ideal situation is when we can design and fabricate the system from turbo outlet to overboard.

We try to obtain the greatest margin possible in order to extend filter life before cleaning is required.

Do You Have a European Supplier and Installer or a Recommendation in Europe for Installation?

We will send a technician to perform or oversee the fitting in whatever location the boat is in.

This may in some cases, actually save costs compared to using local labor.

We also send a technician to commission and fine-tune the system after installation is complete.

Can the System Be Made Modular if There Are Issues Fitting It Into the Engine Room?

The system is modular by design.

We build the control panels to fit the size and location you desire and most installations fit within the envelope of the generator sound shield with the water lift separator fit into the space between the shield and the hull.

We configure the components to fit the yacht.

Both sides may be piped differently if that is what is needed to make it fit and provide for ease of maintenance of the generator.

Roughly What Size Unit Will We Need & What Would Be the Power Consumption?

We typically install a heater with a maximum output of 20kW on a 170kW generator. The full capacity may or may not be connected, depending on how the yacht operates and how the engineers manage power. The rest of the answer is included in the next question.

With the Heater Controller, if There Are Multiple Elements Can It Be Set to Bring the Elements on in Stages, or Do You Have a Soft Start Idea?

We use a zero crossing power controller that modulates power cycle by cycle i.e. 10kw from a 20kW heater would have the controller on for 3 cycles and off for 3 cycles with the switching occurring at the 0 voltage point of the sine wave to prevent noise spikes and harmonic generation that comes from soft starts and contactor type controls.

On system startup we have a ramping up period to prevent a sudden large load being imposed. Also, the heaters are isolated unless the generator is online and has been running for at least a minute to allow the power management system to stabilize after bringing a generator online. The power (and thus exhaust gas temperature) is regulated proportionally to the temperature of exhaust gases leaving the turbocharger. This temperature is, of course, proportional to the load on the generator.

By using this method, the SeaClean system will not place a load on shorepower when the generator is running offline such as when cooling down after switching to shore power. It does not present a parasitic load on the switchboard when large hotel loads heavily load the generator. When hotel loads are at maximum, the heater uses no power so that all power is available to the switchboard.

Are the Heaters Singular or Multiple Elements?

The heater is a single unit comprised of multiple “hairpin” elements.

The number of elements depends on the wattage calculated as part of the required to obtain the correct exhaust temperature. The heater is mounted to the inlet side of the DPF.

Do You Have a Manual Regeneration Mode on the Controller, and Do You Know if It Would Be Possible to Integrate the Controller With Our Alarm and Monitoring System?

Manual operation is available at the front of the control panel at any time the system is online.

Other outputs are available as options.

Is it possible to set the system up to run as a possible load bank as without guests on we are running at 50% load on the engines and I would rather run them at 80% load?

By using the manual control feature, the full capacity of the heater is available to serve as an “exhaust cooled” load-bank.

If greater load-bank capacity is required or desired beyond what is installed to achieve consistent filter operation, we can install larger capacity heaters in the same “envelope” so there is no space or size penalty.

We will design and install a system that provides what you need. It will be economical, and it will work. So far, the only people who have been more impressed than the engineers are the deck gang and guests.

The hull stays clean and there is no diesel smell or smoke to offend even the most sensitive nose. 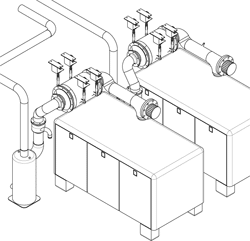 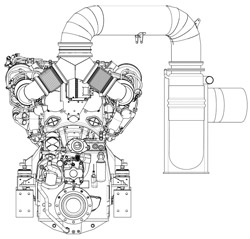