Have you ever noticed a beautiful white yacht with black marks or streaks on the sides? Or maybe a new 100-meter yacht leaving an oily sheen on the water at a pristine marina?

This particulate matter (PM), often called “soot,” is the byproduct of an incomplete fuel combustion. Like the black plume of smoke that a big rig truck expels when accelerating, this soot is also present on diesel engines for marine applications.

Diesel engines work by using high pressures to ignite a fuel/ air mixture in the combustion cylinder. When the fuel and air don’t mix thoroughly and are ignited, the byproduct is soot.

The best way to eliminate soot is with a Diesel Particulate Filter system (DPF). These systems capture soot particles before they are expelled into the environment. These particles are then burned off and disintegrated (a process called filter regeneration) when exhaust gas temperatures (EGTs) are between 500-600° Celsius. 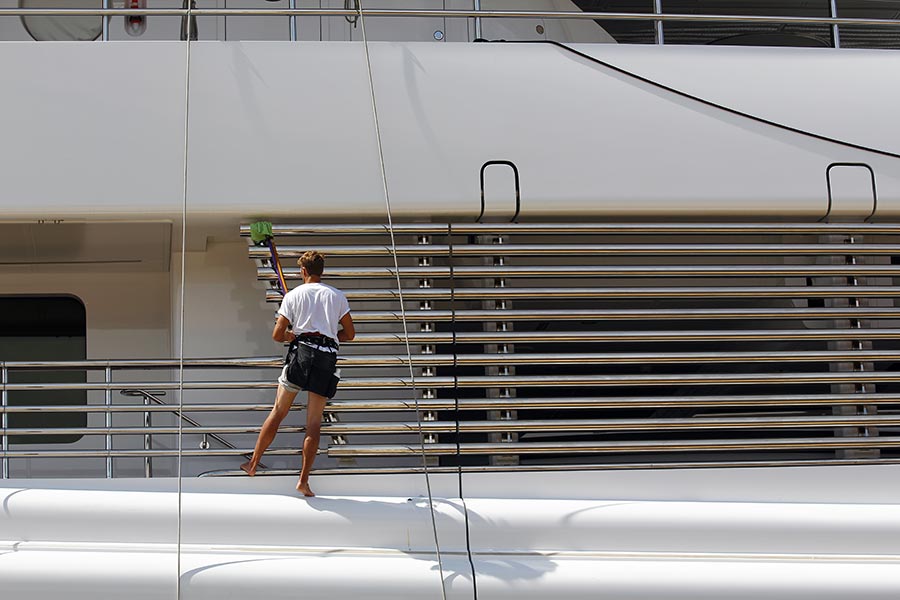 There are many reasons why a diesel engine runs dirty. By far the most common in marine applications are from generators running at low loads. Simply put, the higher the load placed on an engine, the higher the EGTs will be.

Let’s say you have a 100 kW generator that runs at full load, 24/7. The EGTs on this generator should be high enough to hit that continuous regeneration sweet spot of 500-600° C. However, if the load fluctuates from a 50-percent load (when the vessel is full of guests) down to a 50-percent load (during night hours where not much power is required), the EGTs fluctuate as well. During times of the lower load (EGTs lower than 500 ° C), the filters will accumulate more soot than they can burn off. The results of this can be disastrous. For instance, increased back pressure, clogged filters, and more work for the already burdened captain and crew.

This is why selecting the correct DPF system for your vessel is so critical.

There are two types of DPFs: passive and active. A passive system will regenerate on its own passively, so long as the EGTs are between 500-600° Celsius. At these temperatures, the filter will burn off more soot than it accumulates, which ensures a properly functioning system. Passive systems are ideal for engines that operate at constant high loads.

However, if your engine’s load fluctuates, like in our previous example, then an active system would be the ideal fit. These systems actively monitor several control inputs (e.g. back pressure, EGTs, engine load, etc.) to increase EGTs when needed. This is usually done via a diesel burner or electrical heater placed before the filter.

The benefits of a properly designed Diesel Particulate Filter system can be numerous: longer-lasting paint jobs, less work for the crew, cleaner decks, no smell at marinas, no pollutants at sea, and so on.

Whether you have decided to go active or passive, you’ll want to make sure to select the system that not only fits your budget, but also your application needs.

Author: Jorge Lang. Jorge is the brand ambassador for DeAngelo Marine Exhaust with 21 years of experience in the marine industry. +1954 763 3005; [email protected]; www.deangelomarine.com